Established in 2001, Roscoe Records was created to present and promote new music and talent to the industry and world alike. It's goal, to strive to achieve new standards of both pride and excellence in its artists, music, and staff - an excellence that provokes unsolicited compliments from both its peers and listeners. With it's sister company, Allied North Coast Publishing, Roscoe Records embarked on that quest with the release of 'Nothing's Said', a ballad written and performed by Ladd Biro. Receiving positive feedback, the CD single was followed up with an 11 song full length CD titled 'Isn't It Romantic. The 'Romantic' CD received outstanding reviews for it's musical writing and production from industry professionals and an ever growing number of listeners.

Because of the quality and variety of the music, standard radio play has been increasing steadily. In addition, the prominence of the internet has allowed 'Isn't It Romantic' to be heard internationally, with radio airplay opening markets in Europe and Japan. 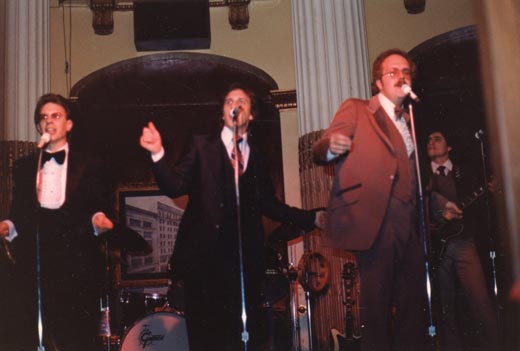 Always one that enjoyed performing as much as recording, Ladd Biro performing on stage in Cleveland's Allen Theatre sometime in the early 1980's. With him are fellow Roscoe performers (Left to Right) Bruce Michaels, Ladd, and Tom Ball, aka Tom McKenzie. Reno Abbadini in the background.

Isn't It Romantic is available through Barnes & Noble stores nationally, online at iTunes or amazon.com, and most independent music stores in the Midwest United States.

Roscoe Records and its writers have provided music for commercial jingles, television and just recently explored the arena of movie soundtracks. Allied Northcoast Publishing is a BMI affiliate and sister company to Roscoe Records. Also established in 2001, Allied Northcoast Publishing partners with writers and endeavors to provide opportunity to writers and musical material for its performers. 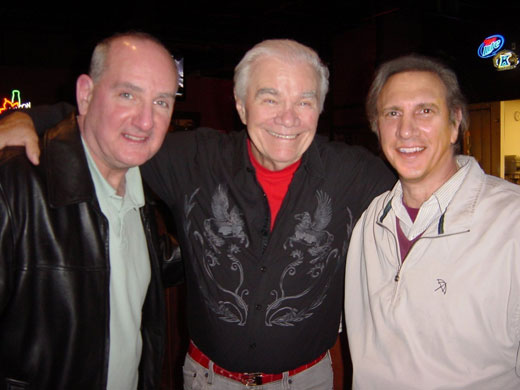 Roscoe Records artists Dan Schneider & Ladd Biro with celebrated singer/songwriter and musician Dickey Lee.
His name continues to be a guiding force for all those aspiring songwriters and singers who want to be successful. He is Dickey Lee, the singer, songwriter, and one of music's most complete entertainers.

With the ever increasing number of digital programs, loops, and kits available and being used, Roscoe Records is proud to make every effort to ensure and preserve a high level of musicianship and emotion in it's music rather than a 'cut and paste' or 'paint by numbers' approach so prevalent in the music industry today.

Our music is available online at the following fine retail locations:

You can follow us on the following social networking sites: